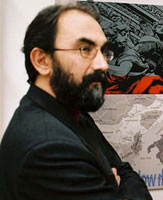 Emil Alexiev – Art historian, art critic and theorist, essayist, writer and poet. Born in Skopje. He finished elementary school and high school in Skopje. Since 1982, in parallel with his studies, he has been working in the Museum of the City of Skopje. In 1987, he graduated from the Institute of Art History with Archeology at the Faculty of Philosophy, Skopje. From 1998 to 2000, he was the head of the Art History Department at the Museum of the City of Skopje. From 2000 to 2007, he was the director of the Museum of Contemporary Art – Skopje. From 2008 until today, he has been working as an advisor at the Museum of the City of Skopje. He has published over a hundred essays, art criticism and texts on the theory of visual arts. He has organized over a hundred exhibitions of Macedonian and foreign artists in the country and around the world. He is the author of a number of important studies in the field of art history and monographs on the work of Macedonian artists. His more significant works include the studies on the work of Dimitar Dicho Zograf (Gjurdja, Skopje 1997), Sergej Andreevski (MGS, Skopje 1998), Dimitar Kondovski (Sigmapress, Skopje 2001), Dancho Kal’chev (MGS, Skopje, 2009), Taki Pavlovski (MGS, Skopje, 2011), as well as the monographs on the life and work of DIMITAR KONDOVSKI (MANU, Skopje 2004), VLADIMIR GEORGIEVSKI (MGS, Skopje 2019) and ROBERT DANDAROV (MGS, Skopje 2020), KONDOVSKI (National Gallery of RNM, Skopje 2022, as well as the history of art XX CENTURY: FINE ARTS IN MACEDONIA – Macedonia, millennial cultural-historical facts (“Media Print Makedonija” and “Evro Balkan” University, Skopje, 2013) and the anthology of contemporary Macedonian art VISUAL ARTS IN MACEDONIA – XX CENTURY, painting-sculpture-graphics (OSTEN, Skopje, 2015). He has published collections of essays SHORT CUTS (Gjurdja, Skopje 2004) and WHEN THE LION ATE THE SUN (Templum, Skopje, 2016), the novel THE BOOK OF HELL (Templum, Skopje, 2019) and the collection of poetry COLORING OF LIFE (Feniks, Skopje 2021).