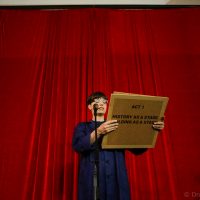 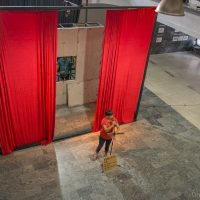 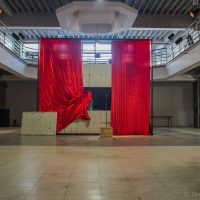 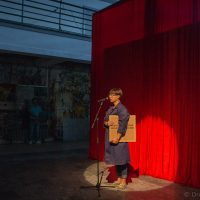 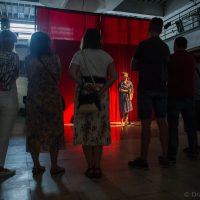 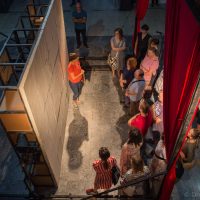 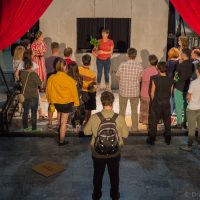 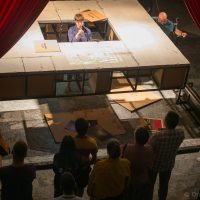 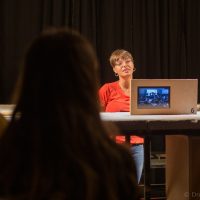 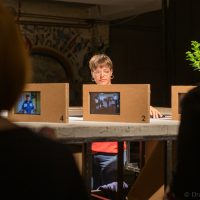 “This Building Truly Talks” About Our History, About Us and On Our Behalf

Macedonia very often suffers from too much history, but even more from an attitude of neglect for its own history. Skopje as the capital of the country, unfortunately, also reflects this phenomenon which has exploded into extremes this past decade. Always having to face consequences of natural disasters, political turmoil and changes and urban planning neglect, every ten years or so, Skopje is living a rather neurotic existence forever yearning for some distant fictionalized past, while lacking the will or the time to truly remember, preserve and value its own recent past. Within our national, as well as local historical narrative there is always an emphasis on divisions, betrayal, victims and the trend of erasing parts of our history, instead of focusing and incorporating the instances of our common life, history and their continuity. The initiative “If Buildings Could Talk” which was born in 2015 by the NGO “Faculty for Things Which Are Not Taught” is a reaction against these process of erasing, hiding or ignoring the traces of community, solidarity, accountability and the collective memory. As their starting point and a fort from they will wage their battle against oblivion and neglect, they have chosen the Railway Residential building, a building which mirros the chronological timeline of the foundation and development of contemporary Macedonia, from post WWII till today. Moreover, besides its physical existence, the Railway Residential Building is also inscribed in the collective memory of the city, while its story and that of its residence echoes all the stages of the development and transition of the city and state between various political systems and economic models.

As the ultimate result of the series of activities and events born from this Initiative, comes the performance “This Building Talks Truly” which won the first prize at the 2019 Prague Quadriennale for Performance, Design and Space, award which was received with great excitement by the cultural scene here. Luckily, quite soon after that, we had the opportunity to see this performance as part of this year’s Young Open Theater festival, to see for ourselves ots powerful message and the their sutble artistry and craftsmanship in telling the history of a building, but also narrating the history of our city and community. “This Building Talks Truly” is a multimedia performance which has incpororated and intertwined in its structure theatrical, historical, visual and performative elements. We can describe it as a monodrama with two characters (the Narrator and the Railway Residential Building), an intimate Brechtian play that doesn’t need bluster or chaos to make its point, a collective story told by a single voice, as well as an interactive installation in space creating multiple worlds which can be explored by the audience. Just like the best myths and legends, it is using in a capable and subtle manner those basic rhetorical figures: metonymy and meta[hor. The Railway Residential Building is projected through the metonymy of the installation and its fluid transformations to present all the major structural features of the building, but also to serve as a metaphor of our common story. The same role is played by Kristina Lelovac as the narrator, who remarkably embodies all the various people and personages which constitute parts of its history (workers, tennants, city and state officials, modern artists, as well as the historian who is saving the story from oblivion).

This performance works because it does not strain itself to be didactic, quite the contrary like any good film or collection of stories, it offers sequences or scenes where the stories are told, acting as our own local Decameron. With each transformation of the installation, the audience is gradually, step by step drawn inside the history of the building, but also that of Skopje and Macedonia. It includes the stories about the construction of the building, life during Socialism, the 1963 Skopje earthquake, the neglect of the transiting period to democracy, even touches upon the Balkan troubles through the visit of Bogdan Bogdanovic during his exile. This factographic listing is infused with life by the incorporation of the stories of the tennats of the building, the film creenings in the small cinema which is part of the building and ultimately by the fight to preserve the spirit of the place as seen through the art project, all of this achieved with the use of modern visual strategies and techniques. All of this would note have been possible without the excellent performance of Kristina Lelovac who impresses with her composure, expressivenes and the depths of her empathy for this building, but also for our shared history.

At the end, we can conclude that the authors of “This Building Talks Truly” have offered us with a highly effective and productive model and recipy for telling our forgotten stories, preserving our own local narratives and history from the claws of politics. This can be achieved by creating and writing stories such as these which are both timeless and also local and rooted in their community.