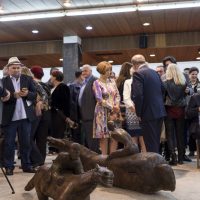 Boro Mitrikeski (1927 – 2018) is a typical example of an artist who in his artistic career, since his beginnings in the mid-1950s, was not guided by established examples of western modern art from the first half of the 20th century, nor , in the further work of rapidly changing artistic trends as new visual paradigms in the second half of the century.

The human and sculptural identity of Mitrikeski is rooted in the culture of the soul, the culture of pagan sensual intimacy with the world, with the emergence and appearances of its forms, expressions and possible transformations. He stayed consistent at every moment of his creative path, although he lived in the time marked by the culture of intellect and reason, the culture of civilization, of the technically made and real, which, as Hermann Hesse says, is always against nature as its rival.

But in both cases, an important constant is that every work of art has its own paradigm in the real world – as a concrete or associative form and shape, like electrochemical impulses from the world or from the human being, as human mental or materialized memories, etc., to which alludes Hesse in the final points of his novel Narcissus and Goldmund. Or, as medieval thinker Alain de Lille wrote, all the works of the world/nature for us are like a book, a picture, and a mirror.
The paradigms of Mitrikeski sculptures, as direct and materially present examples and patterns in reality, can be found in the natural forms of the tree itself. In some of tree’s fragments where Mirikeski felt an anthropoid or zoomorphic shape hidden in the structure of the tree, and with his exceptional sculptural approach, characteristic for the masters of carving, he turned it into an anthological work of his and modern Macedonian sculpture (Horse Head, 1960 , wood, Lying Nude, 1969, wood). Or, in some of his unusual compositions, in whose inner part he saw a horseman (Horse, 1971, wood).

This Mitrikeski did not acquire it, he did not discover it during his sculptural development, but he was ready for it at the very beginning, because, apparently, his human sensibility was formed in such way. This conclusion is strongly supported by his unusually early anthological sculptural work Horseman from 1959, which the artist made in bronze, but according to all the formal and expressive properties of his sculptures in wood.

These are the other kind of paradigms that Mitrikeski carried in himself as a formed human sensibility, and they were based on the aesthetics of the folkloristic and the archaic, in which his hometown Prilep, with its nature and culture, its ethno-folk, revivalist and artistic tradition, has important significance in his development.

The best in all this is that Mitrikeski in his sculpture made synthesis and an appropriate balance of modern, spontaneous, soft and elegantly performed stylization, with the emphasized or somewhat overemphasized voluminous or elongation of archaic-primitivist robustness. Human and animal forms are simplified, static or in frozen dynamic poses. There are no gestures, nor does the artist makes dramatic expressionist carvings in the forms of their anatomy. The textures of their forms have a discrete and signifying play between the reduced smooth and soft surfaces and the more dominant mildly trembling or melted parties (suggesting the speed of the movement that has taken place, or ecstatic), while the parties in which the artist makes shallow chiseling with his chisel are exactly where that folds appear on the skin/tissue due to the position of the body. However, it is so stylized that it suggests inner strength and monumentality although the sculptures are mostly small-sized.

Mitrikeski as a motif was dominantly focused on man, and his portraits his contemporaries and historical figures (Marko Cepenkov, Grigor Prlicev, Krste Petkov Misirkov, Ss. Cyril and Methodius, St. Clement, Samoil, Tanas Lulovski, Rodoljub Anastasov, Lazar Lichenoski and others), as well as a multitude of female and male figures and torso.
Boro Mitrikeski was born in Prilep in 1927, where he completed elementary education. He completed secondary art school in Skopje in 1948/49. He graduated from the Academy of Fine Arts in Zagreb in 1954 and held his first solo exhibition in 1965 at the Museum of Contemporary Art in Skopje for which he received the highest October award of SR Macedonia. He had more than fifteen independent and numerous group exhibitions, and he performed ten monumental sculptures, among which the striking achievement of Ss. Cyril and Methodius. He was Director of the Art Gallery “Skopje” – Skopje, and member of MANU (Macedonian Academy of Science and Art). He died on November 24, 2018.