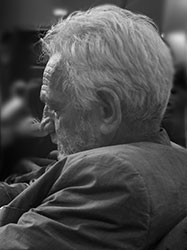 Vladimir Georgievski was born on 1 June 1942 in Skopje, as a child of Eftim and Fotka. After finishing art high school, he enrolled at the Art Academy in Belgrade. He graduated in 1958. He completed his graduate studies at the same Academy in the class of professor Mladen Srbinović.
He worked as a professor at the Faculty of Architecture and the Faculty of Dramatic Arts in Skopje from the early 1980es until the beginning of the new millennium.
In the overall work of Vladimir Georgievski, man and his destiny are a constant theme, esthetic provocation and creative preoccupation. His paintings, drawings, reliefs, sculptures, theatre costumes and stage settings contain actors of all civilization areas: the Spanish nobleman Don Quixote, Dostoyevsky, Bach, Beethoven, Adam and Eve, as well as the Holy Trinity, the drama of crucifixion and mourning. The motifs of old shoes, bread, stones, dry leaves remind of the traces of human existence.
Vladimir Georgievski also created costumes and stage settings for more than 30 theatre plays in Macedonia and the countries of former Yugoslavia.
He was a member of the Association of Artists of Macedonia. He exhibited in all centers of former Yugoslavia. He had study travels in Italy, France, Russia, Great Britain, the USA, Belgium and the Netherlands. He had individual exhibitions in Skopje, Belgrade, Istanbul, Vienna, Rome, Kiev, Sofia and St. Petersburg.
He died on 25 May 2017.