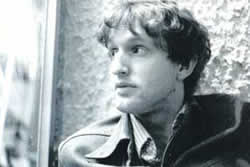 Roy Chicky Arad engages in art, prose, poetry, filmmaking and journalism.
Chicky has published two books. In his first book, The Nigger, he formed a Hebrew adaptation of the Japanese “Haiku”, named “Kimo”. Rather than using the 5,7,5 syllabic orientation as in the “Haiku” verse, Chicky uses a 10,7,6 structure i.e. 10 syllables on the first line, 7 on the second, and 6 on the third. In 2003 Chicky published Aerobics, a novel.
He has recently written, along with Shaul Betzer, the script for the film Big Tuna.
Roy Chicky Arad was born in 1976 in Beer-Sheva, which is a city in the Negev, Israel’s desert. Today he lives and creates in Tel-Aviv. Chicky works for living as a co-editor of a monthly supplement of “Globes”, the Israeli Financial Times.
More details: www.chicky.org