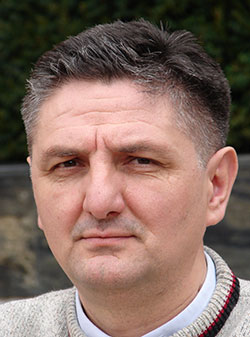 Miroslav Mićanović was born in 1960 in Brčko, Bosnia and Herzegovina and grew up in the nearby Croatian village of Gunja. He graduated from the Faculty of Humanities and Social Sciences at the University of Zagreb and works for the Croatian Education and Teacher Training Agency. He is a poet, writer, literary critic, essayist, and the former editor of the Quorum literary magazine; his individual literary works include: the collections of poetry Grad dobrih ljudi (The City of Good People, 1984), Zid i fotografije kraja, (The Wall and Photos of the End, 1989; 2008), and Zib (1998; 2001); the works of prose Trajekt, (Ferry Boat, 2004), Zapadni kolodvor, (Western Station, 2006), and Jednosmjerna ulica (One-Way Street, 2010), as well as the volume of prose poetry Dani (Days, 2011).