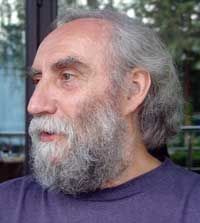 Josip Osti (1945 – 2021), poet, novelist, essayist, literary critic, anthologist and translator, was born in 1945 in Sarajevo, where he graduated from the Faculty of Arts.
He was editor of the culture section of the student magazine Naši dani (Our Days), editor at the publishing house Veselin Masleša, secretary of the Association of Writers of Sarajevo, director of the international literary festival Sarajevo Poetry Days, secretary of the Writers Association of Bosnia and Herzegovina, president of the Association of Literary Translators of Bosnia and Herzegovina and editor/proofreader at Svjetlost (Light) publishing house. In the last twenty years he has worked as a freelance writer.
He lives in Slovenia, in Tomaj in the Karst region.
To date, he has published thirty-three books of poetry (the last twenty written in the Slovenian language), three books of prose, twenty-seven books of essays, critical and journalistic literary texts, a book of conversations with Izet Sarajlić, and two books of correspondence with Biljana Jovanović and Vera Zogović.
Osti has edited and translated fourteen anthologies of Bosnian-Herzegovinian and Slovenian poetry and prose. He has also translated over a hundred books and seventeen plays by Slovenian authors. So far, over sixty five translations of his works have been published in Slovenian, Croatian, Italian, Czech, English, Polish, Turkish, Bulgarian, Spanish, and Macedonian.
Among other literary and translation prizes, he is a recipient of the Zlata Ptica Award (The Golden Bird Award) in 1993, the Veronika Prize in 1999, the Zupančič Award in 2000, the Jenko Prize in 2006, the Vilenica International Award in 1994, and the special international prize for poetry Scrittore di Frontiera in Trieste in 2005.
Osti describes himself as living a haiku life in Tomaj, where he has also written about a thousand haiku in the past seven years. “In No Man’s Land” is the sixth multilingual book in this genre of poetry that was issued by the publishing house Blesok. Meanwhile he was published in almost ten anthologies in several languages.