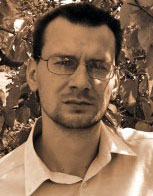 Ján Gavura, PhD (1975) graduated in Slovak and English, and then additionally in Catholic Theology. He works as a lecturer at the Faculty of Philosophy of the Prešov University, where he has dedicated himself to researching twentieth-century Slovak and world literature, theory of literature and of the poetics of the poetic text. He writes reviews and academic text on belletristic, artistic and works in literary science. He debuted with the poetic collection Pálenie včiel or Burning Bees (2001) for which he received the Ivan Krasko Award for best debut book in Slovak. In 2006 he published his second book of poetry entitled Každým ránom si or Each Morning I. He is also the author of an academic monograph on the work of contemporary Slovak poet Ján Buzási (published in 2008). He is intensely working on literary translations from English into Slovak; he has edited and published in Slovak a number of literary selections of authors from contemporary British, Irish and American poetry and prose.