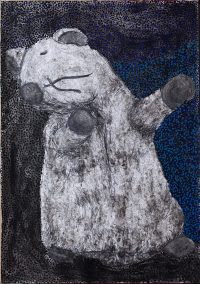 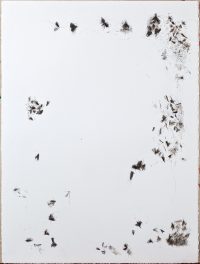 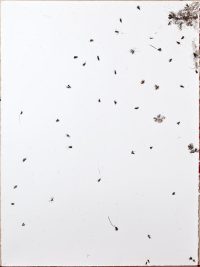 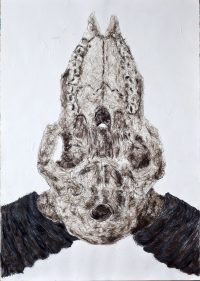 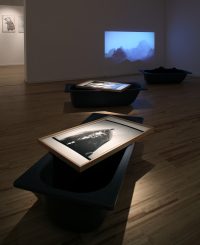 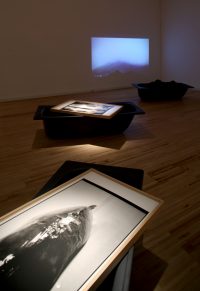 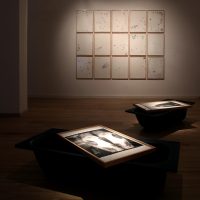 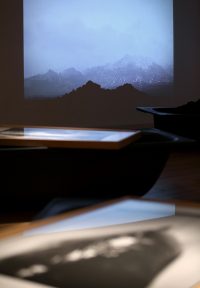 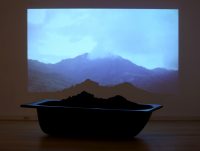 The exhibition is conceived to be in two parts united by the same title Breathing Under. It consists of a combination of still nature photographs which are presented as an installation in the first part of the exhibition, while the second part consists of drawings. This project is a continuation of my previous work exploring all aspects of still life, though one where I play with the various meanings of the terms still (death) and life. I am using iconographic symbols of still nature: birds, flowers, and in this case a fish. This is the point where I end with the classical treatment of the topic and move to open new meanings, a veritable allegorical departure form this basic iconography.

In the first part, I take a dead fish and place it in a home-like atmosphere. The fish is placed on a mirror. The body of the fish is taken out of its natural habitat and positioned in a completely different context. According to Dantо, there are things that we can see without a mirror, but without a mirror we can not see ourselves. We can see death itself in the mirror, in some of the photographs. The photographs are placed on bath tubs. I take the bath tub as a man-made ready-made object, while the soil I consider to be a ready-made from nature. In place of water, the tub becomes both the habitat and the resting place of the fish. One of the tubs is filled with a large pile of dirt, giving it a double meaning. On one hand it is reminiscent of a grave, while on the other it is akin to a mountain. A video of a landscape is projected on them. The video, which is a moving image of a mountain landscape, makes everything shimmer. I have been contemplating about the power of perception. I have seen these mountains many times, but have I really remembered their shapes. Their reality seems to us so unreal, that it gives us a feeling as if we are on a different planet.

The second part of my piece presents drawings in the form of an installation. Taxidermy consists of drawings depicting my process in which I recreate a moth out of human hair. Out of a dead moth I create a new one, made of hair, by reimagining his flight, movement and traces left on the paper. The drawings of a ram’s skull are reminiscent of a uterus. Hair is the bearer of the vital force which still grows after man’s death of man, it is a man-made biological material. I also use grey hair in my work, which symbolizes a different stage of human life. Bones (the skull) are like to an earthly memento of the dead, owing to the fact that the flesh has long before decayed. By adding hair to the drawings, they seem to come to life. Throughout the whole project, I am playing with the notions of life and death, lies and truth, the constant human drive to create and recreate (stuff) things in order to preserve them for eternity.