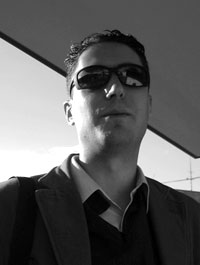 Zvonko Taneski, PhD (1980) – Macedonian poet, literary scientist, critic, translator and editor. He graduated in General and Comparative Literature at the Blaže Koneski Faculty of Philology in Skopje. In 2007 he defended his doctoral thesis at the Department of Slovak Literature and Literary Theory of the Comenius University in Bratislava, and then another doctorate at the Department of Translatology and Interpretation at the Faculty of Philosophy of the Constantine the Philosopher University in Nitra. He has worked at the Institute of World Literature of the Slovak Academy of Sciences. He is an honorary member of the Independent Writers Club in Slovakia. He has authored four books of poetry, the last of which Čokolada vo portfolio or Chocolate in Folder, was published by Blesok (2010). He is actively translating works of Slovak literature in Macedonian and vice versa. He is the author of two academic monographs in Slovak: Metaforické modely obraznosti v poézii Jána Ondruša or Metaphorical Models of Figurativeness in the Poetry of Ján Ondruš (2008) and Slovensko-macedónske literárne a kultúrne vzťahy or Slovak-Macedonian Literary and Cultural Relations (2009). He is professional editor of several Slovak academic publications. His works have been translated in English, Italian, Slovenian, Serbian, Bulgarian, Esperanto, and Slovak.
Contact: zvonko.taneski@gmail.com.

Chocolate in a Portfolio
December 6, 2012
Communicative Status of the “Cobweb Novel”
March 1, 2003