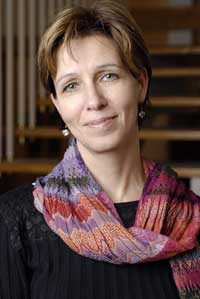 Assistant Professor Stanislava Chrobáková-Repar, PhD (1960) – poet, prose writer, essayist, translator, literary critic and scientist with Slovak and Slovenian citizenship. She graduated in Philosophy and Aesthetics at the Faculty of Philosophy of the Comenius University in Bratislava, and in 1995 she defended her doctoral thesis in Literary Science at the Institute of Slovak Literature of the Slovak Academy of Sciences in Bratislava. Since 2001 she has been living in Ljubljana, where she works at the Apokalipsa publishing house and magazine. Together with husband Primož Repar she has cofounded and coordinated the Review within Review international project, nowadays uniting 16 literary magazines from 13 countries. She has also worked as external editor of the Rhomboid literary monthly. As of 2010 she has been teaching at the University of Nova Gorica, Slovenia. She has authored four individual poetry collections: Nahá v tŕní or Naked in Thorns (2006), Na hranici jazyka or At the Tip of the Tongue (1997 – bibliophilia, 2000), Zo spoločnej zimy or From Our Winter Together (1994, in Slovenian in 2006), and Dotakniti se prazne sredine or Touching Middleground (in Slovenian, 2010); two prose books and two academic monographs. She is also the author of the bilingual inter-genre prose Slovenka na kvadrat / Slovenka na dvakrát or Slovene Squared, published in Slovenian in 2009 and in Slovak in 2010. Her texts have also been published in 14 foreign languages. She is also translating from Slovenian into Slovak and has so far published 11 literary translations. She has laso edited a number of publications, miscellanies and anthologies.
Contact: stanislava.repar@t-2.net.