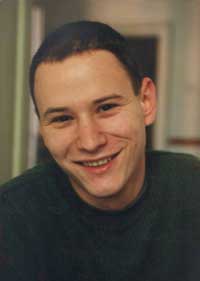 My name is Srđan Papić. I was born in 1977. in Zrenjanin. I am a student of Serbian literature at the University of Belgrade. I participated in the literary section in the Center for youth creativity in Belgrade. I mostly write short stories, but have plans to write a novel. So far I have published several books. Tusks of activity (CSM, Belgrade, 2000) and Diary 2000. (CSM, Belgrade, 2001) are books which contain the works of the authors from the Center for youth creativity, and I am one of them. In the first book we wrote on some given subjects, and the second one is the last year of dictatorship of Slobodan Milošević seen from the eyes of young people. That book even won us the biggest prize of Belgrade. Project Kortasar (Povelja, Kraljevo, 2002) is the book which contains the works of famous Serbian writers inspired by the works of Julio Kortasar. In that book I am represented with one story. Unbreakable differences is my own book of short stories. I have published many stories in magazines in Serbia and Montenegro, Slovenia and Canada. My stories were translated on English, Greek and Slovenian language.
My address is
Mihajlovačka 28, 23000 Zrenjanin, Serbia and Montenegro
My telephone number is +38164 2463259
My e-mail is srdjanpapic@yahoo.com