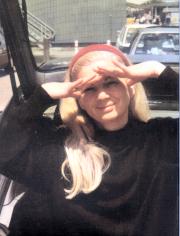 Snezana Bukal was born in Belgrade in 1957. In her family different ideologies, confessions and nationalities were as natural as it should be. Her grandfather, an orthodox priest, and her another grandfather, an atheistic farmer, put the world around her in a perspective long before she knew what perspective meant.
In 1974, while graduating Gymnasium, at the age of 17, she was awarded with the “October Price of City of Belgrade” for collection of poems in manuscript: “Searching with closed eyes”. Suspicious towards her own poems she decided not to publish poetry though in her novel written in Amsterdam in 1995 (“Eerste Sneeuw”, Bezige Bij 1998) three poems did appear.
In 1982 she graduated Comparative Literature and Theory of Literature at University of Belgrade. In the following decade she regularly published short stories. This resulted in collection of stories published in 1986 (Tamna strana, Matica srpska, 1986) and rewarded with the federal price for the best debutante book of the year. In the following year Bukal completed a second collection of stories (Cuvarkuca, Manufaktura snova, 1994) which was not published as scheduled due to the war.
In the same period she also translated into Serbo-Croatian R.L.Stevenson’s “The Wrecker” (Olupina, Rad, Beograd1989) and “After the Race” and “Mr. Duffy” from James Joice’s “The Dubliners” (Dablinci, Haos, Beograd 1992).
In 1992, after a few years of inner conflict, she left the country and found herself in Amsterdam. This movement appeared to be a life-long decision. Despite confusion, she continued writing. The translations of Reina Dokter made Bukal’s work available to the Dutch audience.
A number of reviews in the Netherlands and Belgium press paid serious attention to her collection of stories “Vliegend hert” (De bezige bij, 1995) and her first novel “Eerste sneeuw” (De bezige bij, 1996). Bukal publishes prose and essays in literature magazines and weeklies. ( Bunker Hill, Pen International, ProFemina, Tweede ronde, Lust&Gratie, Vrij Nederland, Republika)
After contributing to three collections of stories for children, Bukal in 1999 successfully wrote a novel for children (Waarom Dora Koen sloeg, Qwinte’ssence, Hilversum 2000). The second print of this book will appear in summer 2001.
Bukal has finished recently a collection of essays on past, memory and identity. Also ready for publication is her third collection of stories. At the moment she is occupied with the research for a novel centered on the Theophano, Byzantine princes who ruled the Saxon Ottonion Empire at the end of the 10th century.
Bukal lives with her family since 1999 in Maastricht.