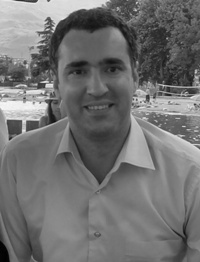 Slavcho Koviloski (Skopje, 1978) is a Macedonian poet, prose writer and literary historian. He is the author of a short stories collection (“The Bad Aunt and Other Stories”), two monodramas (“The Son of Volkashin” and “At the Knife”), three poetry collections (“The sun will shine again,” “Poetry in motion” and “The Gunpowder Poetry “), three novels (“I’m Dangerous”, “Dreaming “and “The Son of the King “), as well as several monographs on history and literature. He has translated five books from Croatian and Bulgarian into Macedonian. His works have been translated into several European languages. He has won several prestigious awards, including: “3rd November Award” (for science), “Prose Masters” (for fiction) and “Jovan Koteski” (poetry). Currently he is the Chief Editor of the oldest Macedonian magazine for literature, culture and art “Sovremenost”. He works at the Institute of Macedonian Literature at the University “Ss. Cyril and Methodius ” in Skopje.