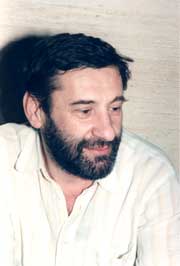 Rusomir Bogdanovski (1948), playwright with an expressed comic orientation. Graduated in dramaturgy from the Faculty of Dramatic Arts in Belgrade, Yugoslavia, where he also received his master’s degree with work in the area of ethno-scenology. He has researched the rich Balkan ethno-theater traditions, with special interest in Macedonian rituals and customs. Author of the plays: A Farce of the Brave Naum (1971), Panurgij (1981), The Miracle of St. George (1982), Pantentalie and Tantelina (1986), This Evening’s Falstaf (1992), St. Basil’s Eve (1998), Nothing without Trifolio (1988), as well as a number of plays for children, and screen and television scripts. Recipient of many local and international theater and television prizes. For many years was playwright at the Macedonian National Theater. Teaches dramaturgy at the University of “St. Cyril and Methodius” Faculty of Dramatic Arts, Skopje.