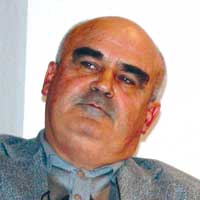 He is also an author of books on socio-political comments – First person singular (interviews) and Page after page.