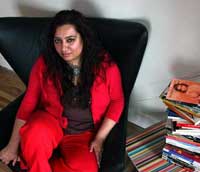 Raman Mundair is a writer and artist. She was born in India, raised in Manchester and Leicester and lives and works in Scotland. Mundair is the author of A Choreographer’s Cartography, Lovers, Liars, Conjurers and Thieves and The Algebra of Freedom. She is a Rolex Mentor and Protégé Award nominee, a Robert Louis Stevenson Award winner and was identified recently by the BBC/Royal Court Theatre as one of the ‘next generation of promising new writers in Britain’. Her artworks have been exhibited at the Gallery of Modern Art, Glasgow, City Art Gallery, Leicester and Kevin Kavanagh Gallery, Dublin. The Independent newspaper wrote in a review of her work “Raman Mundair is a rare breed: a poet whose writing works on the page and the stage. Her readings reveal the secret music of the poem… Mundair is literature at its best: thoughtful, provocative and sharp.” www.ramanmundair.com