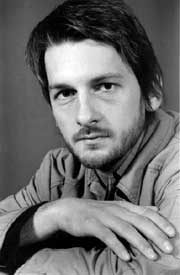 Primož Čučnik, poet, translator and critic, was born in Ljubljana in 1971, and studied philosophy and sociology of culture at the University of Ljubljana. His poems have appeared in a number of literary magazines in Slovenia and abroad. His first collection of poetry, Two Winters, was published in 1999 and received Best First Collection Award. He translates from Polish and is co-editor of the literary magazine Literature. His second book is Rhythm in hands (2002).