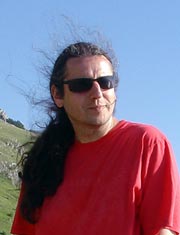 Predrag Lucić (1964 – 2018).
He has graduated primary and secondary school (something similar to gymnasium) in Split.
He was studying theatre and radio direction at the Faculty of Drama Arts in Belgrade. He has passed both of the graduation exams, yet he remained an absolvent.
He has directed in Belgrade, Split, and Tuzla.
At Split Summer 1987, he created the festival newspaper Summer Times.
Since January 1985 he occasionally works for Fear, satirical supplement of Nedeljna Dalmacija.
Since 1998 to present day he is a full time author of Feral.
Starting the same year, he writes the column “Differently Young” at Omladinska Iskra, he is an editor of culture and the joker supplement Le Spizd.
In 1989, he begins to work at Nedeljna Dalmacija as a journalist, while extending Feral with Viktor Ivančić and Boris Dežulović, and renaming it into Feral Tribune. In Autumn 1990 he moves with Feral Tribune to Slobodna Dalmacija, where he is employed as prewar and war reporter.

In March 1993 he leaves Slobodna Dalmacija and with a group of colleagues established independent and sovereign satirical-political biweekly Feral Tribune.
He is the editor in chief of the first few issues. In December 1993, Feral Tribune turns into a weekly magazine; since then, Lucić works as editor, author of satirical and so-called serious articles, edits the web pages, creates photo-montages, writes and edits variety of headings (Greatest Shits, At the end of all ends, Šempjun, Tromblon, Informbureau…), and established and edits the Feral Tribune Library.
His poetry, prose and drama texts were published in Fantom slobode, Ars, Sarajevo Notebooks and Naše pismo.