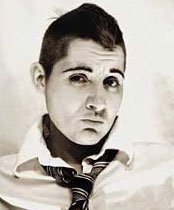 Mima Simić, born 1976, graduated from Zagreb Faculty of Philosophy with a degree in Comparative Literature and English Language and Literature, and also holds an MA in Gender Studies from the Central European University (CEU) in Budapest. She is a writer, translator, and a cultural, gender and film theorist. So far she has published a collection of short stories Adventures of Gloria Scott (AGM, Zagreb, 2005) and had numerous short stories published in Croatian and international literary magazines and similar publications. Her stories have been included in several Croatian and international anthologies, such as Ekran stories, Queer stories, Best Croatian Stories of 2005, Na Trećem trgu – Anthology of New Short Story in BiH, Croatia, Serbia and Montenegro and translated into English, German, Polish and Slovenian. She is a member of the editorial team of Sextures, E-journal for Sexualities, Cultures and Politics, and on the editorial board of Ekviva – the regional women’s web portal. She has translated several books into Croatian and English and regularly translates fiction and theory. As a journalist, cultural and film critic she writes for various Croatian and international publications. In 2008 she was voted best Croatian film critic.