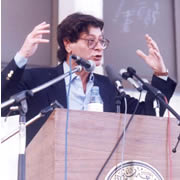 Mahmoud Darwish is considered to be the most important contemporary Arab poet working today. He was born in 1942 in the village of Barweh in the Galilee, which was razed to the ground by the Israelis in 1948. As a result of his political activism he faced house arrest and imprisonment. Darwish was the editor of Ittihad Newspaper before leaving in 1971 to study for a year in the USSR. Then he went to Egypt where he worked in Cairo for Al-Ahram Newspaper and in Beirut, Lebanon as an editor of the Journal “Palestinian Issues”. He was also the director of the Palestinian Research Center. Darwish was a member of the Executive Committee of the PLO and lived in exile between Beirut and Paris until his return in 1996 to Palestine. His poems are known throughout the Arab world, and several of them have been put to music. His poetry has gained great sophistication over the years, and has enjoyed international fame for a long time. He has published around 30 poetry and prose collections, which have been translated into 35 languages. He is the editor in chief and founder of the prestigious literary review Al Karmel, which has resumed publication in January 1997 out of the Sakakini Centre offices. He published in 1998 the poetry collection: Sareer el Ghariba (Bed of the Stranger), his first collection of love poems. In 2000 he published Jidariyya (Mural) a book consisting of one poem about his near death experience in 1997. He published his book of poetry “Stage of Siege” in 2002. In 1997 a documentary was produced about him by French TV directed by noted French-Israeli director Simone Bitton. He is a commander of the French Order of Arts and Letters. Mahmound Darwish is an honorary member of the Sakakini Centre.