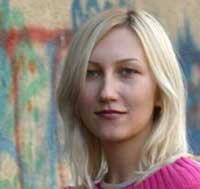 Magdalena Horvat – poet and translator. Born in 1978, in Skopje, Macedonia. She has worked in two national daily newspapers, Dnevnik and Vreme, and attended the English Language and Literature department at the “Blazhe Koneski” Faculty of Philology. She is the author of the poetry collection “This Is It, Your” (Makedonska reč, 2006) and of the Macedonian translations of Sylvia Plath’s novel “The Bell Jar” (Tri, 2006), Fiona Sampson’s verse-novel “The Distance Between Us” (Magor, 2005), and Anna Aguilar-Amat’s poetry collection “Music and Scurvy” (Blesok, 2006). Horvat also selected and translated Pat Boran’s poems for the collection “Telefonska sekretarka” (“The Answering Machine”) published by Blesok in 2007.

She has written on the topic of poetry for the Macedonian newspaper Vreme and the British magazine Poetry Review. Her poems have been published in the Macedonian literary magazines Blesok, Mravka, Nashe pismo, Sovremenost, as well as in the Macedonian anthologies “The Purple Springs: Anthology of The New Macedonian Poetry” (Detska radost / Struga Poetry Evenings, 2006) and “A Hundred Minus One Poems” (Makedonska reč, 2006). Her translations of Macedonian and international authors have been published in several Struga Poetry Evenings anthologies, and her own work has been translated and published in the Slovenian magazine Apokalipsa, the American anthology “In Our Own Words Vol.7” (MWE, 2007), and the Catalan anthology “Europa es una dona/Europe is a Woman” (Universitat Autonoma de Barcelona, 2007).