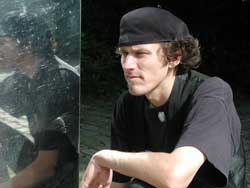 Jyrki Kiiskinen debuted as a poet in 1989. He has also worked as a journalist, especially in the literary magazines. He was the editor in chief in Nuori Voima -magazine 1991-1994, after that he continued his career as the editor in chief in Books from Finland 1996-2000. Nowadays he works as a free writer in Helsinki.
Jyrki Kiiskinen was one of the ardent poets who created the Living Poets’ Society, and has later on arranged several literary events. He has translated poetry from Swedish, French, English and Spanish, he has written essays, and has now published four collections of poetry and three novels.
The National Broadcasting Company awarded his collection As I live with the poetry prize Dancing Bear in 2000 for the best collection of the year, and his latest collection Roundtrip was also nominated for the short-list of the Dancing Bear prize.
In 1994 Jyrki Kiiskinen debuted as a prose writer with the novel Suomies, which was nominated for the short-list of the Finlandia Prize, and later on in 1995 the novel was awarded with the Kalevi Jäntti prize.
His texts have been translated approximately into twenty languages.