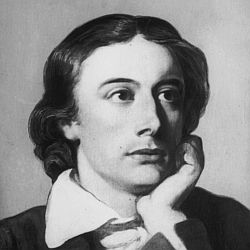 English Romantic poet John Keats was born in 1795, in London. In 1816 Keats became a licensed apothecary, but he never practiced his profession, deciding instead to write poetry.
Leigh Hunt, an influential editor of the Examiner, introduced Keats to a circle of literary men, including the poets Percy Bysshe Shelley and William Wordsworth. The group’s influence enabled Keats to see his first volume, Poems by John Keats, published in 1817. Writing some of his finest poetry between 1818 and 1819, Keats mainly worked on “Hyperion,” a Miltonic blank-verse epic of the Greek creation myth. In late 1819 he returned to the piece and rewrote it as “The Fall of Hyperion” (unpublished until 1856). That same autumn Keats contracted tuberculosis. In July 1820, he published his third and best volume of poetry, Lamia, Isabella, The Eve of St. Agnes, and Other Poems. Under his doctor’s orders to seek a warm climate for the winter, Keats went to Rome with his friend, the painter Joseph Severn. He died there on February 23, 1821, at the age of twenty-five, and was buried in the Protestant cemetery.