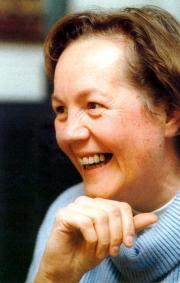 D-r Jelena Lužina (26 May 1950, Dubrovnik); a theatre scientists and a professor at the Faculty of Drama Arts in Skopje.
She graduated Comparative Literature at the University of Zagreb, Croatia in 1972. Received her MA in 1993 and her Ph.D. in 1995 at the St. Cyrill and Methodius University in Skopje.
She is the author of more than three hundred theory and essay studies in the area of theatre science and theory of literature, as well as several monographs (books and anthologies of the Macedonia dramatics/dramaturgy: Theory of Play and Theatre (1998); Macedonian Bloody Wedding 100 Years Later (2000); Ten Modern Macedonian Plays (anthology of the Macedonian plays in English, 2001). She is also the author of the books Macedonian Folk Play (1996); New Macedonian Plays (1996); Theatralics (2000).
She has inspired and led quite a few scientific and research theatrical projects — Database of Macedonian Data; Dictionary of Theatre Terminology; Encyclopaedia of the Theatre in Macedonia, and other projects.
She has organised and led several distinguished theatre science symposia in Macedonia and outside it. She has prepared and edited some theatre/theatre science collections: The Macedonian dramatics/dramaturgy between the Tradition and Modernity (1998); Macedonian Theatre Critics (1999); Acting and Directing of the Macedonian Theatre (2000); Essays on the History of the Macedonian Theatre (2001).
She has been working on the Faculty of Drama Art in Skopje since 1990, first as a teaching assistant, and now she is a professor of the subject Macedonian Play and Theatre. She has been teaching Theory and Methodology of the Theatrological Research at the graduate studies since 1999.

The Essay as a Training Ground
December 7, 2012
Theatre in Search of its New Identity
February 1, 1999