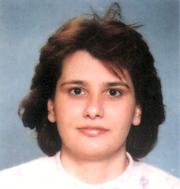 Jаsmina Moisieva Gusheva, born in 1964 in Skopje. Graduated at the Philology Faculty in Skopje, at the Comparative Literature Department in 1986. She finished the postgraduate studies with thesis on the Macedonian literature at the same Faculty in 1994. Ph.D. at the same Faculty.
Works at the Institute for Macedonian Literature in Skopje since 1988 at the Department for Macedonian-Balkan literature relations.
She participated on numerous literary scientific projects. Publishes essays and literature studies on the comparative literature and Balkanistic themes. She is the author of the book The Tragi-Comical at Chingo, 1997, Face and Back, 2000 and Chingo’s Appart Poethics, 2001.