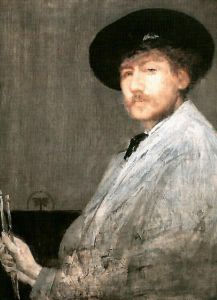 Whistler was raised in the United States, went to West Point, worked as a cartographer for the US Navy, and then he went to Paris in 1855 (at 21 years old) to study painting. In 1859 he moved to London and settled there. He espoused the philosophy of l-art-pour-art. His pictures of people are not portraits, not even the one of his mother; it is an Arrangement in Gray and Black. His pictures are Studies, Nocturnes, or Symphonies. In his day critics said he just threw paint at a canvas — that what he did was not painting. Welcome to the start of 20th Century art.