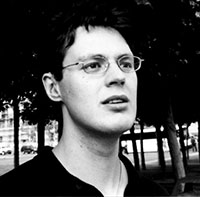 Ilya Kaminsky was born in Odessa, former Soviet Union in 1977, and arrived to the United States in 1993, when his family was granted asylum by the American government.
Ilya is the author of “Dancing in Odessa” (Tupelo Press, 2004) which won the Whiting Writer’s Award, the American Academy of Arts and Letters’ Metcalf Award, the Dorset Prize, the Ruth Lilly Fellowship given annually by Poetry magazine. “Dancing in Odessa” was also named Best Poetry Book of the Year 2004 by ForeWord Magazine. In 2008, Kaminsky was awarded Lannan Foundation’s Literary Fellowship
In 2009, poems from his new manuscript, “Deaf Republic,” were awarded Poetry magazine’s Levinson Prize.
His anthology of 20th century poetry in translation, “Ecco Anthology of International Poetry,” was published by Harper Collins in March, 2010.
In addition, Ilya writes poetry in Russian. His work in that language was chosen for “Bunker Poetico” at Venice Bienial Festival in Italy.
In late 1990s, he co-founded Poets for Peace, an organization which sponsors poetry readings in the United States and abroad with a goal of supporting such relief organizations as Doctors Without Borders and Survivors International.
Ilya has read from his work and served as a Writer in Residence at numerous literary centers, colleges and universities, from Harvard to Naropa. Ilya has also worked as a Law Clerk at the National Immigration Law Center, and more recently at Bay Area Legal Aid, helping impoverished and homeless in solving their legal difficulties.
Currently, he teaches Contemporary World Poetry, Creative Writing, and Literary Translation in the Master of Fine Arts Program in Creative Writing at San Diego State University.
He lives in San Diego, Califonia with his beautiful wife, Katie Farris.

Ilya Kaminsky is member of Blesok’s International Editorial Board.