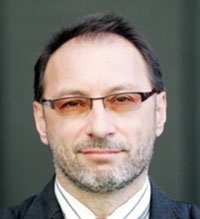 Igor Bratož, born 1960 in Ljubljana, has studied comparative literature and sociology of culture at the University of Ljubljana and now works as a journalist and a regular book reviewer at a Literary Supplement of the biggest slovenian daily Delo. He has published a collection of short stories Pozlata pozabe (The Gilding of Oblivion, 1988, awarded with the Golden Bird Prize) and is co-author of collection of stories Rošlin in Verjanko, 1987. His short stories have been published in Austria, U. K., Hungary, U. S. A., Germany, Croatia and Czech Republic. He translated mostly American literature (Raymond Carver, Richard Brautigan, Raymond Chandler, Donald Barthelme, Woody Allen; Salman Rushdie, Mircea Eliade, Harold Bloom, Mark Strand, John Rawls, Francis Fukuyama etc.). He was a member of editorial board (and, for a few years, an editor-in-chief) of literary magazine Literatura, a member of editorial board of Mentor magazine, and since 1999 he is a member of the editorial board of literary magazine Sodobnost, one of Slovenia’s three leading literary magazines. Member of Slovene Writers’ Associaton and Association of Slovene Literary Translators and Zamp, Slovenian authors’ society (specialised in literary rights). Since March 2000 he is the president of Zamp.