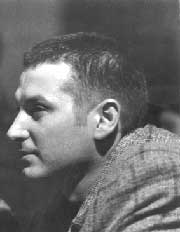 Georgi Gospodinov was born in 1968 in Jambol, R. Bulgaria. He is the author of:
Lapidarium, (a collection of poems, 1992) – National literary prize for debut book; The cherry tree of a nation (a collection of poems, 1996) – Annual prize of the Association of the Bulgarian writers for book of the year; Natural novel (a novel, 1999) – Special prize in the national contest “Razvitie” for modern Bulgarian novel; And other stories (a collection of short stories, 2001).
He is the co-author of: Bulgarian chrestomathy (1995); Bulgarian anthology (1998).
He is the editor in chief of the “Literaturen vestnik”. His work has been translated in the USA, Hungary, Germany, France, Finland, Yugoslavia, Greece, Austria… He works and lives in Sofia.