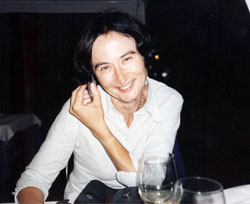 Fiona Sampson (b.1963, Wales, UK) is a poet, writer, book critic and essayist. She is the editor of Orient Express (a journal of contemporary writing from Enlargement Europe) and of the renowned British poetry magazine Poetry Review.

Sampson is the author of the books: Picasso’s Men (Phoenix Press, 1994), The Self On The Page (Jessica Kingsley, 1998, 2002; published in Hebrew by Ach, 2002), The Healing Word (The Poetry Society, 1999), Folding The Real (Seren, 2001; published in Romanian by Ed. Paralela 45, 2004), Патувачки дневник (in Macedonian; Книжевна академија, 2004), Evening Brings Everything Back (translations of Jaan Kaplinski, Bloodaxe, 2004), A Fine Line: New Poetry from East and Central Europe (together with Jean Boase-Beier and Alexandra Buchler: Arc, 2004), the chapbook Hotel Casino (Aark Arts, 2004), The Distance Between Us (Seren, 2005; published in Romanian as Distanta Dintre Noi: Ed. Vinea, 2005; published in Macedonian as Далечината меѓу нас: Магор, 2005), the chapbook Setting the Echo (Arts Council of England / Addenbrooke’s Hospital, 2005) and Writing: Self and Reflexivity (with Celia Hunt: Palgrave-Macmillan, 2005).

After a brief career as a concert violinist, Sampson was educated at the Universities of Oxford and Nijmegen. Widely published as an essayist and reviewer, she has also written for radio and public art, and has been published and broadcast in more than 15 languages. Awards include the 2003 Zlaten Prsten for international writing (Macedonian Foundation for Culture and Sciences), an AHRB Fellowship in the Creative and Performing Arts 2002-5, the Newdigate Prize, and awards from the Arts Councils of England and Wales and the Society of Authors