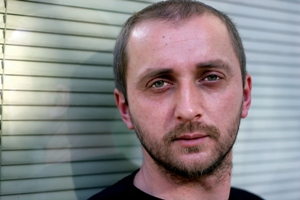 Faruk Šehić was born in 1970 in Bihać. He grew up in Bosanska Krupa, which was still part of the Socialist Federal Republic of Yugoslavia. Until the outbreak of war in 1992, Šehić studied Veterinary Medicine in Zagreb. However, the then 22-year-old voluntarily joined the army of Bosnia and Herzegovina, in which he led a unit of 130 men as a lieutenant. After the war he studied literature and since 1998 has published his own literary works. Literary critics regard him as one of the most gifted young writers from the former Yugoslavia, as a shining light of the so-called “knocked-over generation”.
As in Šehić’s début, the poetry collection Pjesme u nastajanju (2000, ‘Acquired Poems’), most of his works include the subjective experience of the war as a focus. The prose in his short stories is sober. Without judgement he depicts the everyday experience of war, the brutal events, but he also weaves in the natural observations of the soldiers. Every detail is valued, be it the death of a comrade, or the sight of birds on a power line. An unsettling effect unfolds through this ironic juxtaposition. His anti-war stories do not make the claim that they reflect the experiences of an entire generation – though it is possible that this approach contributes to the cult factor of his work. Šehić’s oeuvre is not restricted to examination of the war.
In addition to poetry and prose Šehić writes essays and reviews literature and performing arts. He publishes in the magazine Žurnal (zurnal.info) and e-Novine.com and Beton (elektrobeton.net) in the Belgrade media. His works have been translated into English, French, German, Hungarian, Slovenian, Macedonian and Polish. The collection of short stories Pod pritiskom (2004, ‘Under Pressure’) was awarded the Zoro Verlag Prize. He is a member of the writer’s association and the P.E.N. Centre of Bosnia and Herzegovina. Faruk Šehić lives as a freelance writer and journalist in Sarajevo.