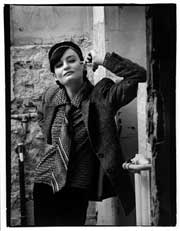 I’m poet and pianist.
I was born in 1967.
In 1992 I graduated from Music Academy in Wrocław, in1996 I finished a college of further education – creative writing – in Jagielloński University in Cracow.
Now I study philosophy at Jagielloński University in Cracow.
I have been published in all renowned literary periodicals in Poland.
I am represented in many Polish and foreign anthologies (German, Swedish, Russian). My works have been translated into German, French, English, Russian, Swedish, Slovenian, Hungarian, Serbian, and Macedonian.
Rewards include: Clemens Janicki Prize for young poets (1995), Georg Trakl Prize for my first book of poetry Hazard (1996), Scholarship from Kultura Paryska in Paris (1998), Scholarship from Ministry of Culture and Art (2000), as well as numerous poetry readings and meetings in Poland and abroad.