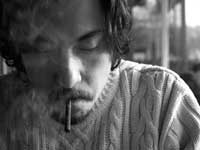 Efe Duyan, born 1981 in Istanbul, is a poet and architect. After graduating from the German School of Istanbul he studied Architecture and Philosophy at Middle East Technical University (B.A.) and History and Theory of Architecture in Yıldız Tecnical University (M.S). He teaches architecture at Mimar Sinan University. His poems and essays have been published in several literary reviews such as Edebiyat Eleştiri, Öteki-Siz, Damar, Kavram Karmaşa, Akköy. He has been on editorial boards of the reviews Nikbinlik, Damar, Sol and Sanat Cephesi. He has published one collection of poems, Takas (2006) with Kemal Özer. His book The Construction of Characters in Nâzım Hikmet’s Poetry was published in 2008.