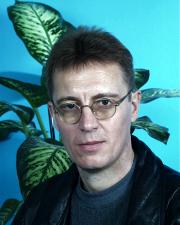 Dinko Delic was born on November 02 1957 in Slavonski Brod (Croatia). Grammar School he finished in Gradachac (Bosnia and Herzegovina). In Belgrade (Serbia) he graduated the Faculty of Philology in 1980. After that for thriteen years in Gradačac while he was teaching literature of ex-Yugoslavia nations on secondary-school he wrote, worked in local theatar and played on guitar in rock-band. Since 1993, he removed in Tuzla (BiH) where he has been cooperating with published and electronic medias and with nongovernmental organizations.
Dinko Delić played on guitar in Jazz Big Band of RTV Tuzla in 1994. He worked as a producer, ran a music-studio for recording young rock-groups. Also he was the first music editor of Independent Radio Hayat Tuzla. Since then as a debate trainer Delic has been runing a few debate clubs in organization of Soros Debate Center Sarajevo including participation in debate sessions on RTV BiH. Hi’s editor-in-chief of literature magazine Diwan.
In 1998. International Peace Centre in Sarajevo published Dinko Delic’s book of short forms named “Opljachkani sarkofag” (“Rifled Sarcophagus”). The other one “Bosanska knjiga mrtvih” (“Bosnian Book of Dead”) was published in 2001 by Alternative Institute Mostar. Dinko Delic published poems, short stories and essays in magazines: Knjizhevna kritika, Putokaz, Knjizhevna revija, Most, Blesok, Lica, Forum Bosnae, Behar, Album, Odjek, Iza, Hrvatska misao, Prosvjetni list, Kolaps and Diwan.