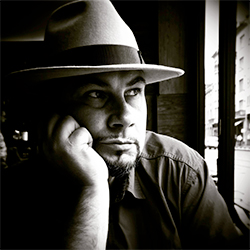 Born in Sarajevo in 1973. He exhibited at more than 150 exhibitions in 18 countries, 22 of which were individual. He was awarded with ”Collegium Artisticum 2006” for his work “Venice Story” in 2006. He is a member of the ULUPUBIH Association of the Artists of Applied Arts and Designers of Bosnia and Herzegovina and AUFBiH Association for Art Photography of Bosnia and Herzegovina, where he is a Master of Photography. He has participated in many photography workshops where he lectures in art and commercial photography. He has been a guest lecturer at several Bosnia and Herzegovina’s universities at the departments of art and journalism. Since 2010-2013 he has been participating in designing and producing the UN Women campaign on women’s rights. He is a member of the “Leagues of Real Men” and an active supporter of gender equality, human rights and secular society. He works as a photography and video educator for UNICEF. Apart from photography, he also works on documentary films, video production and web design. Since 2016 he has been living and working in Sweden.