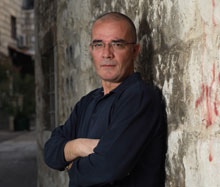 – journalist and writer, making a living exclusively by writing since 1983;
– works periodically as a film and TV scriptwriter, copywriter, and writer of questions for TV quiz shows;
– recently writes in weekly news magazine “Nacional” as the commentator and reporter; before that performed similar tasks for a number of Croatian daily and weekly publications – newspapers and journals;
– married, father of two children (ages 11 and 4);
– studied first political sciences and afterwards comparative literature and phonetics; applied for a graduate paper from the field of stylistics, but never completed it;
– born in 1963 in Zagreb, living and working in Split since 1996.

Published books:
– “Hotel Grand”, novel, published by Algoritam, Zagreb, 2008
– „Pričaj mi o njoj“ (Talk to me about her), novel, published by AGM Zagreb, 2006
– „Kome ćemo slati razglednice“ (To whom shall we send our Postcards), collected poems, AGM Zagreb, 2005
– „Kadrovi kadra“ (Frames of a Frame), selection of newspaper columns on TV, AGM Zagreb, 2005
– „Osmi povjerenik“ (The Eighth Commissioner), novel, AGM Zagreb, 2003 (the novel won five major national prizes for fiction for the year 2003)
– „Riječi iz džepova“ (Words from Pockets), collected poems, published by „Biblioteka Feral Tribune“, Split, 1998.
– participated with works of fiction and essays in various collections of papers and literary works;
– translations of the novel „Osmi povjerenik“ published in Slovenia and Macedonia, and the translation into German will be published in Germany in the course of the current year; certain poems and fiction fragments translated and published also in English, Polish, Serbian and Ukrainian.

– his photo exhibition “Ship Lines” was presented in Split (2008) and Zagreb (2009); in May this year it will be presented in Graz City Hall Gallery.