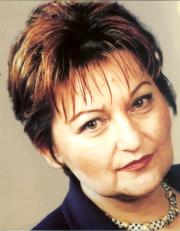 poet. Born 1953 in Skopje. Graduated at the Department of Yugoslav Literatures and Macedonian, University of Skopje. Study visits to Paris, 1981/82 an a scholarship granted by the French, Government, and 1982/83 by the Gulbenkian Foundation for a course in Armenian at the Faculty for Oriental Languages. Worked as a journalist mainly at the woman’s magazine “Zena” where she is now editor-in-chief and director. She is one of the ten founders and member of the Independent Writers of Macedonia Association.
Author of the following books of poetry: Natural Occurrence (1980), awarded with the “Miladinov Brothers” prize for best book of the year, Live Measure (1985), Wormwood field (1985), selected and new poems, Selections of her poetry: “Champs d’absynthe” (editions Est/Ouest, Paris 1996, translated by Harity Wybrands), Heavy Silk (1997) and in German Schwere Seide (Corvinus Presse, Berlin 2000, translated by Sabine Fahl) and Cocoons, 1999 (Chattanooga Chapbooks, Tennessee, USA, translated by Peter H.Liotta).