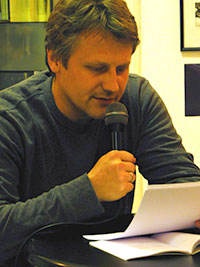 The poet, critic and performance artist Ivan Hristov (b. 1978) graduated in Bulgarian literature at Sofia University in 2001 and defended his PhD in Bulgarian Modernism at the Bulgarian Academy of Sciences in 2008. His first book of poetry, Farewell to the 19th Century (2001) won the prestigious 2002 Southern Spring award for the best debut book. His second collection, Bdin (2004) received critical acclaim, as well as the 2006 Svetlostrui Prize for poetry. His work has been translated into English, French, Turkish, Greek, Hebrew, Romanian, Serbian, Croatian and Hungarian. Ivan has participated in numerous poetry festivals abroad. He is also a leading literary critic of his generation with numerous academic publications; his book-length research study, The Sagittarius Circle and the Concept of the Native, won the Bulgarian Ministry of Culture’s National Culture Fund competition and was published in 2010. In 2011 one of his poems from Bdin was selected for inclusion in the prestigious American anthology of literature in translation, Two Lines. Since 2010, Ivan Hristov has been a member of the organizational committee for the international Sofia Poetics festival. He currently works as a researcher at the Institute of Literature of the Bulgarian Academy of Sciences.
Ivan Hristov is member of Blesok’s International Editorial Board.