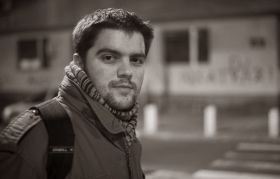 Bojan Marjanović (Užice, 1990), graduated journalism from the Faculty of Political Sciences in Belgrade.
He published a book of poetry “Politics, Pornography, Poetry” (Književna radionica Rašić, 2015).
He won the NIN scholarship for novel in creation for 2015, as well as Laza Lazarević award for a non-published story for 20 He published his stories, poems and essays in magazines.

He lives in Belgrade where he works as a journalist for “Liceulice” magazine, and he publishes his newspaper articles and literary criticism in the media across Yugoslavia. Since December 2013, together with Tijana Spasić he has worked as the editor of the literary program City Library at Grad Cultural Centre.