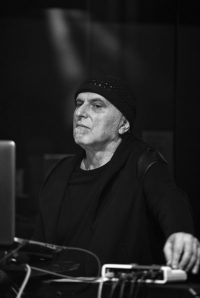 The author, in his vanity, wants to hear his work being played in a hall… At least that is what I do — it happens that I hide in a dark corner as if I am gone and I look at the reactions of the people. Because, if they see me, hypocrisy is immediately visible — they either say secretly that it is no good, or they tell you “bravo”, while they don’t think so or they just laugh. It is good if they don’t know that you watch them to see the real reaction. When I see that there are smiling people, that they feel good, that everybody’s silent for at least five minutes after leaving the hall, it means that you have managed to take them to your world — says Kokan Dimuševski, the composer who has recently received the “Panče Pešev” award, the highest professional award that is given by the Association of Composers of Macedonia.

Kokan Dimuševski is a composer and author of contemporary music whose work can cover a dozen of pages. What is specifically typical about him is his constant creative restlessness. He recorded his first album when he was 17 as a keyboard player, composer and arrangement maker of LEB I SOL, which have a legendary status. He won the “7 SKOJ Secretaries” award with them; the band won the “Best Band” award in 1978, then given by the influential music magazine “Jukebox”, and the music that they made for the theatre play “The Liberation of Skopje” directed by Ljubiša Ristik was also quite successful. Later, it opened new creative spaces for Dimuševski. On top of his engagement as a piano player for MRTV’s Big Band he was solely dedicated to theatre music for a period, and for his work on this area he received two significant awards — those from “Sterjino pozorje” in Belgrade and “Vojdan Cernodrinski” in Prilep.

His curiosity for new media threw him in the hands of electronic music, and in 1977 he recorded his first electronic piece in the studios of the national house, and he won the award at the Days of Yugoslav Radio Stations. He repeated his success 13 years later when he made the radio phonic piece “Silyan the Stork”, based on the script of Duško Dimitrovski and Marko Kolovski.

His exploring sprit made his creative work exceptionally rich and diverse, he also wrote jazz pieces for big and small bands, chamber pieces, pieces for symphonic orchestra, in 1997 he signed the album “Okto ehos” where he deals with the Church Slavonic and Macedonian singing, using electronic instruments for the old pieces and obtaining a fully new and integrated sound and a different sound expression. For his engagement in the area of radio phonic work he received significant awards such as those by the influential BBC and Radio France…

In the last years he has been creating pieces for “classical orchestra formations” with electronic music as his faithful companion; he has 40 releases behind him and he has recently received the “Panče Pešev” award, the highest professional award given by the Association of Composers of Macedonia.

Somehow, in the past years you were often highly valued for your work. You were awarded many times, but it seems that the latest award “Panče Pešev” which is given by SOKOM comes at the best time. Did you expect it? Did your colleagues’ recognition make you happy?

DIMUŠEVSKI: When you’re 60, it’s logical to receive awards. I have rounded that number and I have another very significant one — 45 years of public presence as a musician, as a creator. The “Panče Pešev” award grated by SOKOM means a lot to me, because it is a recognition granted by your colleagues who are musicians and composers. On the other hand, I accept all of this as logical, because it seems that it is normal to have it after so much work, so many written or recorded pieces, after so many smaller awards, if you like. I have event waited for this award as some kind of an advance — this year, next year or some time afterwards… Although it could have happened several summers ago. It all has some sort of a logic.
It was not logical that I receive the high “7 SKOY Secretaries” when I was 18. It was a shock because it was at the same rank as AVNOJ award that was given to top Vinča scientists, extremely high politicians and some rock musicians. That was the shocking thing in my life — when we received that award with LEB I SOL. This now is not so shocking. I understand it somehow normally. Yes, I cherish it! I keep it at home and it will remain as a memory. That’s it. It is probably awarded as deserved.