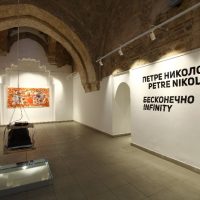 The National Gallery of Macedonia, within its 2019 anniversary program, on the occasion of celebrating 70 years of existence, as its closing event realized the exhibition of Petre Nikoloski titled “INFINITY”, which opened on December 27 2018 in the premises of Čifte Hammam.

Nikoloski’s exhibition consisted of several multimedia works and installations, most of which were made specially and exclusively in the context of the architectural and ideological-discursive narrative of/behind Čifte Hammam. Key works were the obelisk of books and the infinite shelf; the former, as a male phallusoid principle, was placed in the female part of the hammam, while the latter, a complex installation of wooden material, yarn and hemp, shaping a specific, hot, networked installation in the shape of a uterus, as a symbol of the female principle, was positioned in the male part of the hammam.

The first key object – the obelisk, as well as the infinite shelf – was made of books that were obtained through altruistic contributions from institutions, publishing houses and individuals, thus building the sculptural work with non-traditional sculptural material. The author strives for multidisciplinarity, shifting the boundaries of the classical art form, implementing literature and art, expanding the circle of the audience and initiating cooperation between institutions of different profiles.

The other installation, which was designed to invite the visitor to enter its very shape, offered special and predetermined paths and directions of movement, both in a shaping and a formal sense, creating a spatially-opposed linear transformation of the arabesque and the dome’s decoration.

In the other part of the hammam there were video installations, collage objects and other spatial installations that Nikoloski has so far produced and presented at other exhibitions.