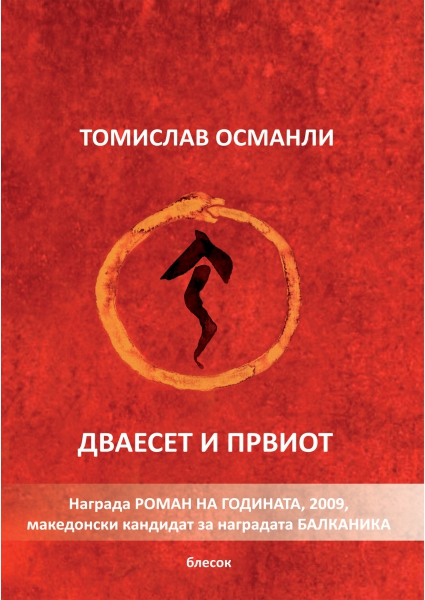 Macedonian candidate for the “Balcanica” award, 2010.

(The book is printed in Macedonian.)

Tomislav Osmanli has written an elegant, mystical, intellectually sophisticated, delicately structured novel on the search for the secret passageway to a better tomorrow, to better places, to eternity resembling the mythical serpent eating its own tail. It is a delightful novel read after a single crack of the book. Prof. Venko Andonovski, PhD, writer and literary critic

What has Tomislav Osmanli written that is so impressive? In brief, something that no one in our literature has done yet: a vehement novel on the onerous twenty-first century, in Macedonia and the world, but a novel that is not literarized following the logic of the literary text, but the technological standards of computer games. Prof. Jelena Lužina, PhD, theatrologist and literary critic

I consider Osmanli one of our finest authors, but even if you do not, The Twenty-First should be on your reading list because it is bold, juicy, full of surprises and familiar images. Zlatica Petkovska, journalist

This novel raises the Macedonian setting (too), as well as all of us, higher, to the level of the world in the twenty-first century, a century not in the least undemanding, a world in which everyone is just wandering around, searching for the centre of, as per Eliade’s words, “the absolute reality” within. Dimitar Baševski, writer, Judge for the Novel of the Year Award (Utrinski vesnik )

Crucial for the final decision was the expectation that with The Twenty-First, this Book of Phantasms by Tomislav Osmanli, a new protagonist appears on the highest platform of the Macedonian fictional map. We would hope that The Twnty-First might, if not open, then at least encourage or initiate new creative possibilities and prospects for Macedonian literature. Prof. Naume Radičevski, writer and literary theorist, Judge for the Novel of the Year Award (Utrinski vesnik )