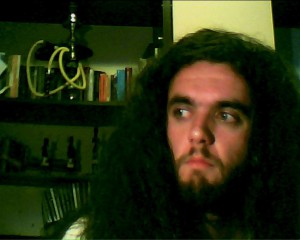 Zoran Bejkovski was born in 1981 in Bitola where he graduated from high school. He enrolled at physics studies, stopped them and enrolled at computer science, but he never graduated from university.
He used to work as a distributer and head of distribution of weeklies and monthlies, assistant electrician, in a kiosk, C# programmer, and he is part of the organization of “Barricade” art cinema, as well as “Counter Shot” debate cinema.
He has been writing poetry since high school, and also short stories for several years. He publishes his poetry at his web page (http://bejko.atspace.com/). He has been published at various Internet portals, student magazines, literarily inserts and brochures, and he has not published a book so far. In 2010, he won the second award at the traditional short story competition of “Nova Makedonija” daily, for his short story “Mirjani” (Worldly Men). In 2012 he participated at “Kikinda Short” short story festival.
He loves chess and chess issues and he is a fanatic race biker; he often draws in his free time (http://bejko.deviantart.com/gallery/).