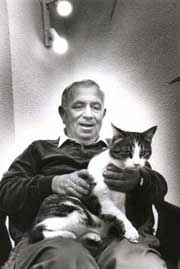 Born in Würzburg, Germany in 1924, he emigrated, living briefly in Petach Tikvah before emigrating with his religiously observant family to Jerusalem in 1935. His poetry has been translated into more than 40 languages, but Amichai has also published a novel, short stories and a number of plays, and has received the prestigious Israel Prize. In World War II he fought with the Jewish Brigade of the British Army, and upon his discharge in 1946, he joined the special forces of Palmach. During the War of Independence he fought in the Negev, on the southern front. Following the war, Amichai attended Hebrew University, studying Biblical texts and Hebrew literature, and then taught in secondary schools. Amichai’s first volume of poetry, Achshav Uve-Yamim HaAharim (“Now and in Other Days”) was published in 1955 and aroused serious interest in readers and critics alike. In 1995 he was awarded laureate of Struga poetry evenings.