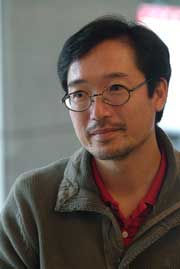 Yasuhiro Yotsumoto was born in Osaka, Japan on August 21, 1959. He published his first collection of poetry A Laughing Bug in 1991. Since then 6 collections of his poetry were published including Starboard of My Wife (2006), Conversation Poems: Poetry vs. Living (Co-authored with Masayo Koike, 2005), Golden Hour (2004). He won several awards such as Hagiwara Sakutaro Award in Japan and his poems have been translated into English, French, Serbian, Hebrew and other languages. In addition to poetry, Yasuhiro writes essays, book reviews, and short stories.