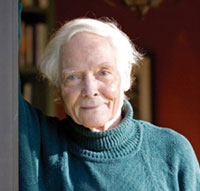 W. S. Merwin was born in New York City in 1927. He is the author of more than fifteen books of poetry, including The River Sound (Alfred A. Knopf, 1999), which was named a New York Times Notable Book of the Year; Flower and Hand: Poems 1977-1983 (1997); The Vixen (1996); Travels (1993), which won the Lenore Marshall Poetry Prize; The Second Four Books of Poems (1993); The Rain in the Trees (1988); Selected Poems (1988); The Carrier of Ladders (1970), which received the Pulitzer Prize; The Lice (1967); and A Mask for Janus (1952), which was selected by W. H. Auden for the Yale Series of Younger Poets.
He has also published nearly twenty books of translation, including Dante’s Purgatorio (Alfred A. Knopf, 2000); numerous plays; and four books of prose, including The Lost Upland (1992), his memoir of life in the south of France.
His honors include the Aiken Taylor Award for Modern American Poetry, the Bollingen Prize, a Ford Foundation grant, the Governor’s Award for Literature of the State of Hawaii, the Ruth Lilly Poetry Prize, the PEN Translation Prize, the Shelley Memorial Award, the Wallace Stevens Award, and a Lila Wallace-Reader’s Digest Writers’ Award, and fellowships from The Academy of American Poets, the Guggenheim Foundation, the National Endowment for the Arts, and the Rockefeller Foundation. He is a former Chancellor of The Academy of American Poets and recently began a five-year term as judge of the Yale Series of Younger Poets. He lives and works in Hawaii.