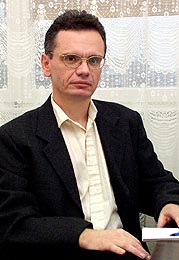 Vojislav Karanović, born in 1961 in Subotica. Graduated in Literature from the Faculty of Arts in Novi Sad. Works as the Editor of the Literature program on Radio Novi Sad. From 1992 until 2005 has been the editor for poetry of the literature magazine “Letopis Matice srpske”. Writes poetry, radio plays and essays. Lives in Novi Sad.
Has published seven poetry collections: Keyboard (1986), Minutes from Awakening (1989), Live Bars (1991), Steep Sights (1994) , Son of the Earth (2000), The Rush of Light (2003), Breath of Things – Selected poems (2005).
Won the most eminent national literary awards, such as: Branko Ćopić Award, Branko Miljković Award, Meša Selimović Award, The Golden Flower Award. The poetry collection The Rush of Light was declared the Serbian book of the year 2003. Has won Vladislav Petković Dis Award, for overall poetical achievement. His poems have been translated into several foreign languages.

Elegy About an Acacia Under the Window
August 6, 2006