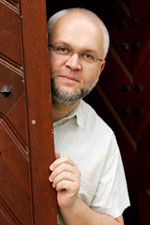 Viliam Klimáček (1958) – poet, prose writer, playwright, author of books for children and youth, a theatrologist. He debuted with a poetry collection in which he preferred children’s and students’ slang, and in which the poems are characterized by breaking syntactic rules and by a light-hearted outlook on life. In his short-story collection Ďalekohladenie or Lookingglass-Stroking (1991) on the same principles he presents short humorous texts with “fresh material” from the student and military environment, and playfully focuses on the graphic element of the text as well. In his book Karamelky or Taffies (1992) he deals with his dedication to jazz, and presents the wordplay and graphical realization with calligrams, as well as parodic, grotesque and absurd proceedings. His novels include: Panic v podzemí or Panic in the Underground (1997), Váňa Krutov (1999), Naďa má čas or Nada Has the Time (2002), English Is Easy, Csaba Is Dead (2004) – published under the pseudonym Peter Doktorov. He has authored a considerable of plays. His novel Námestie kozmonautov or Astronaut Square (2007) was declared novel of the year in Slovakia, and received the prize of the SME daily readership.