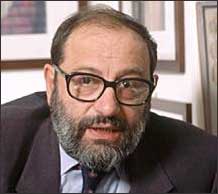 Umberto Eco (1932), Italian writer and literary scholar, best known for his first novel, Il nome della rosa (1980; The Name of the Rose, 1983), a murder mystery set in a medieval monastery. In the academic world he is known as a leader in the field of semiotics, the study of signs and symbols.

Eco was born in Turin, Italy. After earning a doctorate from the University of Turin in 1954, he worked on cultural programs for Italy’s state-owned broadcasting network. From 1956 to 1970 he taught aesthetics and semiotics at various Italian universities, and in 1971 he became a professor of semiotics at the University of Bologna. Since then Eco has also been a visiting professor at several universities in the United States, including New York University, Yale, and Columbia.

While Eco’s theoretical work in semiotics has influenced scholarship, it is as a columnist for Italian newspapers and magazines and as a fiction writer that he is popularly known. In addition to Name of the Rose, Eco has written several other novels that draw on his extensive knowledge of history, philosophy, and literature. These novels include Il pendolo di foucault (1988; Foucault’s Pendulum, 1989), a fantasy about the universal appeal of secret societies, and a similarly quirky and philosophical novel, Isola del giorna prima (1994; The Island of the Day Before, 1995). Baudolino (2000; translated 2002), an epic novel that takes place in Constantinople during the Fourth Crusade, examines the human propensity to invent in the process of recording history.

Eco’s theoretical works include Opera aperta (1962; The Open Work, 1976), a study of aesthetics; La struttera assente (1968), which he revised and translated into English as A Theory of Semiotics (1976); and The Limits of Interpretation (1991), written in English.

From Internet To Gutenberg
August 1, 2000